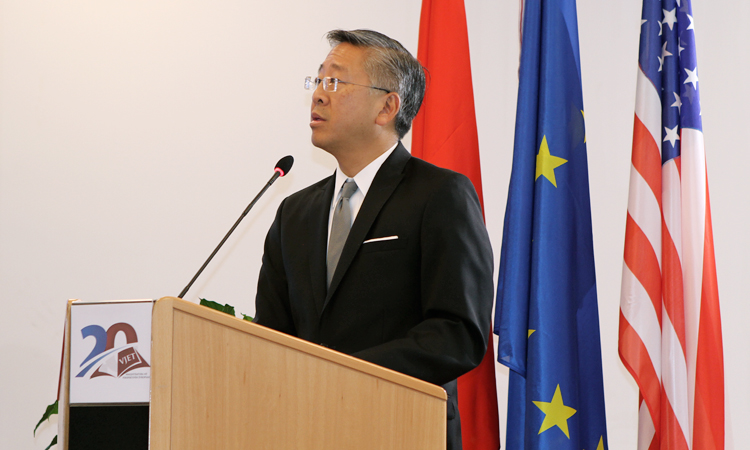 Good morning! Today, I see two groups in this room. The first group is on the stage, they are some foreigners and some, with due respect, some seniors with a lot of experience in the justice system. To me, the second group is the most interesting. The second group, they are the young people, away from the stage, with their faces full of optimism and self-confidence. They all inspire hope for the future of Albania. [applause] This is for you.

Like all of you, I am here to recognize the important role of the School of Magistrates in preparing the next generation of judges and prosecutors.

But if you will allow me, I want to add something specific about your graduate Fildes Hafizi and something about the next big challenge to the judicial system of Albania – organized crime.

I had the opportunity to attend the graduation of the School of Magistrates last year.  I had the pleasure then of talking with Fildes Hafizi about her commitment to improve Albania’s judicial system.  Like all of the graduates, she was a bright and talented young person who wanted to serve her country.

The judicial system of Albania failed Fildes.  The system failed to keep her dangerous husband in prison.  It failed to protect her when he was released.   Fildes, like other women in Albania who are victims of domestic violence, deserve better from their justice system.

Fildes’ murder should not be for nothing.  She should be an inspiration to all of the graduates of the School of Magistrates to carry on her work to deliver real justice to the Albanian people.  She leaves that responsibility with all of us.

As we celebrate the 20th anniversary of the School of Magistrates today, it offers us a moment to reflect on the progress made and road ahead.

All Albanians should be proud of the steps forward they have taken over the last few years.  Judicial and prosecutorial vetting will begin in the next week.  It has been a long road to reach this point, but this process will be done well and professionally, giving hope to all Albanians that they can find justice in their courts.

Albanians should be proud that they have removed criminals from their Parliament.  In this respect, the 2017 Kuvendi is much better than the 2013 Kuvendi.  Finally, Albanians, both in government and in opposition, should be proud of the significant progress made against cannabis cultivation.

But the biggest and most difficult challenge remains ahead of Albania – the fight against organized crime.  Until the big fish are arrested, prosecuted and go to jail, the cannabis will return, judges will be bribed, and government officials will be corrupted.

What do we know about the Organized Crime Problem in Albania?

There are some famous names of Albanian criminals, like convicted drug trafficker Emiljano Shullazi, whom the media claims continues to carry out drug and arms trafficking from his pre-trial detention cell.  Or Lul Berisha, the head of the violent Durres gang who was mistakenly released from prison early by prison officials.  This resulted in the arrest of the director of the prison and the prison lawyer, but Lul Berisha mysteriously remains free.  And finally the magician Klement Balili, an international drug trafficker wanted by Greece and the U.S. Drug Enforcement Agency, but who has managed to escape Albanian justice for 18 months through the incompetence of prosecutors, the police and the Ministry of Justice.

There are many more Shullazis, Lul Berishas and Klement Balilis in Albania.  Ask any police officer and he or she will tell you another dozen names of criminal leaders who deserve to be in jail.

How will we defeat powerful organized crime leaders?

In the United States in the 1920s and 1930s, there was an epidemic of organized crime.   Elite interagency government task forces were created to target mafia leaders like Al Capone.  They had prosecutors, police, and financial crime experts working together.  It is critical that Albanian police, prosecutors and intelligence services work more closely together to fight organized crime.

This will not be easy.  It is likely to be violent.  In 2014, Albania had 72 car bombings, most believed to be the result of mafia violence.  The Albanian people should demand action, but know that to achieve results against powerful criminal leaders requires patience, courage and sacrifice.

We believe it is time for the government of Albania to declare war on organized crime.

We believe that some of the most important soldiers in this war will be graduates of the School of Magistrates.