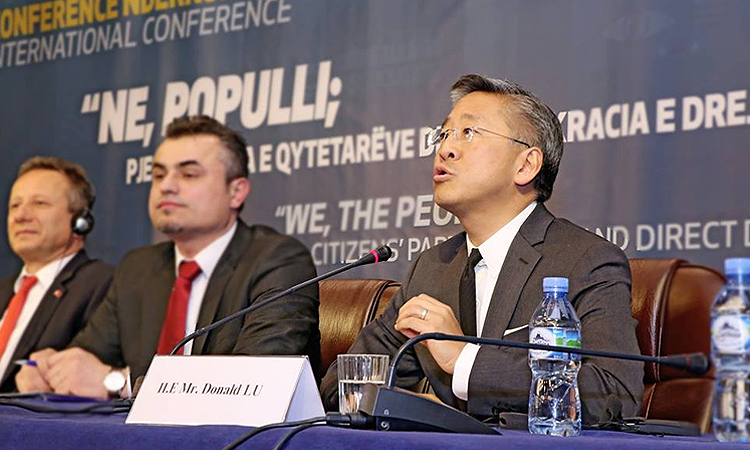 If we, civil society, international partners, and the media, are not eagle-eyed, corrupt politicians, judges, prosecutors and criminal bosses will try to steal this election, judicial reform and everything else in this economy.

These people are particularly afraid of domestic election monitors and those who safeguard direct democracy.  You speak the language.  You know the political context.  And you have learned the tricks of the political parties.

You in civil society and the media are the watchdogs.  This is not a task for amateurs.  It is not cost-free.  It is not without risk.  To do this effectively, you need political and financial support.  You need experience, credibility and above all you need courage.

That same eagle eye is necessary for judicial reform.  We are already seeing powerful people try to maintain their control over the courts and over the prosecutors.

The most recent example of this is the action of Albania’s Prosecutor General.  For more than 18 months he has consistently and loudly spoken against the judicial reform.  In November and December, prosecutors tried and failed to seize the ILDKPKI computer servers that are vital for the vetting.

Last Friday, as required by the new Constitution, there was a lottery for members of the new Judicial Appointments Council, one of several new institutions that will safeguard judicial independence.

The lottery was conducted honorably by the Secretary General of the Parliament, but the Prosecutor General violated the spirit of the Constitution by sending a list of only three prosecutors to fill three positions.

The Constitution is clear that these Council members should be selected by random lottery.  The Constitutional Court, the High Court, and the High Council of Justice each submitted longer lists of qualified persons for their positions on the Council.  By contrast, the Prosecutor General chose the three prosecutorial positions himself by sending a list with only three names – selected with no transparency — to fill three vacancies.

Fortunately, those Albanian and international experts who designed this reform predicted that powerful people would try to manipulate the councils.  It says clearly in the Constitution that the members of this Judicial Appointments Council must undergo vetting immediately.  Some Council members have resigned this week rather than be first to face  vetting.  We will be watching closely to see whether the Vetting Commissions comply with this Constitutional requirement and whether all the members of the Judicial Appointments Council pass the vetting process.

The people of Albania need to show these powerful people that they are watching.  Albania’s international partners will support their efforts.

Next week American and EU judges and prosecutors will arrive for the beginning of the International Monitoring Operation.  They will first help the Parliament to evaluate candidates for the Vetting Commissions.  Then they will serve as monitors on each of the Vetting Commissions to ensure that this reform is carried out without political bias or tolerance for corruption or incompetence.

We call on patriotic, qualified Albanian citizens to apply to serve on the Vetting Commissions.  The Avokati i Popullit website has all the details for applying.

My message today is clear.  The United States is watching, the European Union and its member states are watching, the OSCE is watching, and the Council of Europe is watching.  More importantly, the Albanian people and civil society must be watching to prevent powerful people from stealing your democracy.