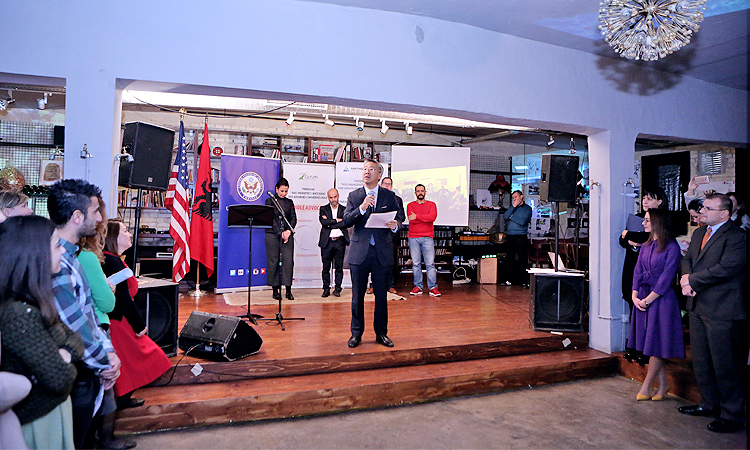 I’ll would like to tell you a secret.  If I had not joined the government, I would definitely have been an NGO person. After finishing two years in the Peace Corps and graduate school, I applied to several NGOs to do development work but the only job offer I received was from the State Department.

Many of you know my wife Ariel who has worked in NGOs for more than 25 years.  So our family is happy that we can contribute at least one member to civil society.

When I was in Washington waiting to come to Tirana, I was told by some so-called Albania experts that the NGO community here was weak and completely captured by political parties.  They used this analysis to convince the United States and other donors not to support civil society.

When I came here two years ago, I was surprised to find the exact opposite.

It’s a huge burden that Albanian civil society carries to keep these guys honest and to speak out against injustice. Like one that happened two days ago.

On Wednesday, notorious convicted organized crime chief Lul Berisha was released from prison for unknown reasons.  He served less than half of his 25 year sentence for six murders, drug trafficking and organized crime.  We should all be outraged by this news and we should be telling the corrupt courts that this is unacceptable in a democracy.

We recognize that this is not easy to do. We want to support you in that effort.  That is why we are launching this initiative to encourage organizations, and individual activists to speak out and demand change.

I will end by thanking Co-Plan and Partners Albania for their leadership in developing this excellent program.  I also want to recognize Atlas Corps which has created a special fellowship program for eight young Albanian NGO leaders to spend a year working with NGOs in the United States.