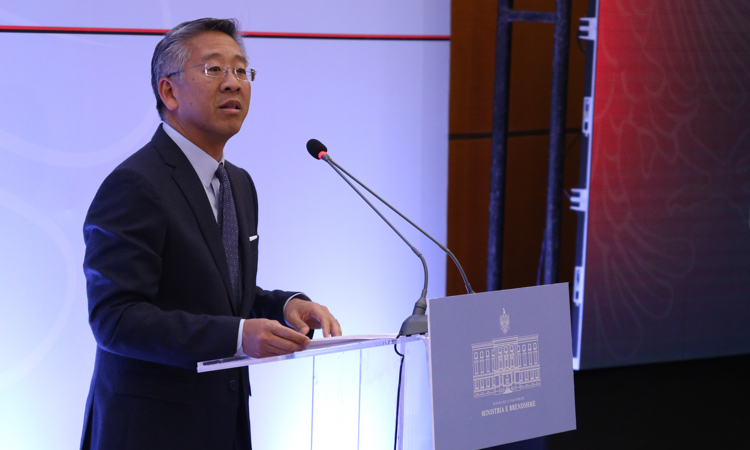 My colleagues from ICITAP police assistance, OPDAT prosecutorial assistance, and the American FBI are here to recommit ourselves to the fight against organized crime in Albania.

Our police assistance program is prepared to have an international advisor working inside of this interagency task force.  Our prosecutorial and police assistance will support the development of new institutions to fight organized crime – SPAK and NBI.  And we have a new FBI special agent who specializes in transnational organized crime and will be working in Tirana for several months to support this effort.

We are putting our money where our mouth is.

In America we have another saying – “There is no such thing as a free lunch.”  If America and EU countries are going to devote our resources and our credibility to this war against organized crime, we expect results.

What do we expect?  We expect that this aggressive plan by the Albanian Government will result in the arrest and prosecution of several big fish early next year, and that this success will continue in 2018 with the SPAK and NBI.

Albania’s international partners expect this.  The people of Albania demand and deserve this.

Finally, in Albanian you have the saying – “Dielli duket që në mëngjes.”  We like this action plan’s clear and unambiguous acceptance that Albanian organized crime is a serious problem and a national security threat.  It also accepts that there has been a failure so far of Albanian criminal justice organs to deal with criminal groups.

What we also know is that Albania has a problem with the connection between criminal groups and politicians.  If you deny this, please examine the cases of Arben Ndoka, Mark Frroku, Gentian Muhameti, and Elvis Rroshi.

This is a problem not of one party; this is a problem that has plagued Albanian politics since the fall of communism.  The Albanian people have our assurance that the United States will engage strongly against organized crime no matter what links it has with powerful people, including powerful politicians, judges, prosecutors or businessmen.  No one is above the law.

In Albanian, you say, “The big fish eats the little ones.”  Let us for once eat the big fish in Albania.