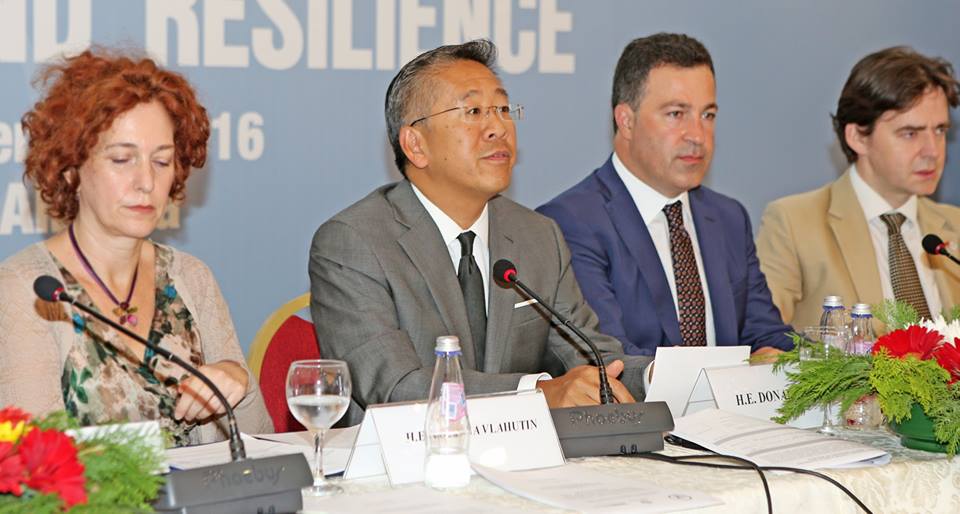 I love that Mr. Peleshi quoted Malala Yousafzai. My daughter who is 11-years-old, this summer read Malala’s autobiography and it filled her with questions, questions about the conflicts and the world we live in. But during this week of the first days of school for children all around the world I think it is a beautiful reminder of how a young girl can inspire us all.

The police said Xhema tried to pull three people into his car over a two-hour period while proclaiming, “Allah Akbar.  I have been sent by Allah” and “I want to kill you all.”

Unfortunately, most violent extremists are less obvious and much more sophisticated than Mr. Xhema.  They use techniques and technologies that make them difficult to identify and hard to catch while recruiting foreign fighters or attempting acts of violence.

But countries of the Western Balkans have been incredibly successful, and they should be proud of their recent success in arresting and prosecuting foreign terrorist fighters.  In the region there have been 93 guilty verdicts with another 35 individuals currently on trial.  Bosnia has found 12 people guilty with 8 now on trial.  Kosovo has indicted 75 persons and has obtained guilty verdicts in over 50 cases.  Macedonia has now 18 guilty dispositions for foreign fighter related charges.  And Albania earlier this year has convicted 9 persons for a total of 152 years for recruitment and participation in terrorist organizations.

Albania has also reduced the flow of terrorist fighters from its soil from over 90 in 2013 and 2014 to zero during the last two years, according to the Albanian Institute for International Studies.  This is an incredible accomplishment without parallel in the Western Balkans.

But now Albania and the Western Balkans are worried about a new threat — the possible threat of foreign fighters transiting as refugees fleeing from Iraq, from Syria and from Afghanistan.  The United States is proud to support the leadership of the OSCE, the Office of the Prime Minister and SHISH in holding this tabletop exercise to focus on preventing this emerging threat.

At the same time, it is critical that these efforts not violate the legitimate rights of refugees to seek safety and protection, as defined under the 1951 Geneva Convention on Refugees.

One of the keys is better information and better border protection.  One of the tools made available recently to Albania by the American FBI and the U.S. National Counterterrorism Center is access to a terrorism database through an information sharing agreement signed during Prime Minister Rama’s visit to Washington in April.  With this tool, Albanian Border Police can access a list of thousands of potential terrorists that has been compiled with the cooperation of dozens of partner countries.

Finally, ISIS is not confined to Syria and Iraq.  ISIS is not just an army.  It is an ideology.  And through that reason, it poses a serious threat to Europe and beyond.  We do not know in what form these threats will materialize — as they have so tragically this year in France, in Belgium and in Germany.  But from what we do know is that from where ever these threats will come, we are confident that if we work together, we will be ready to face them.