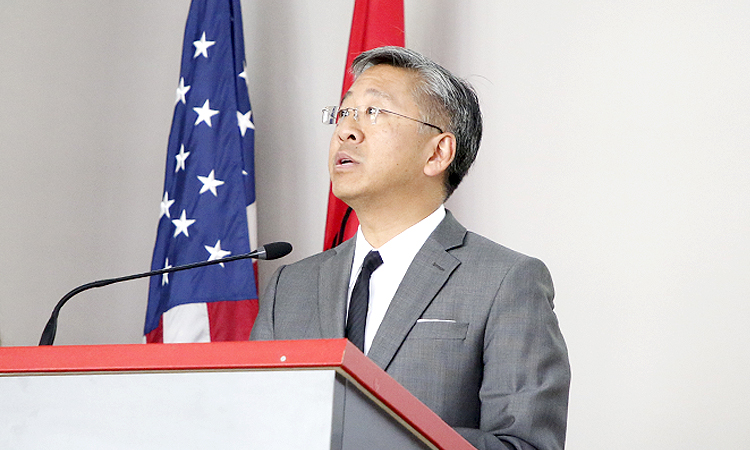 I want to commend the remarkable work you have done to fight corruption in the education system.  But first, let me say two words about the current controversy surrounding former Interior Minister Saimir Tahiri.

All of you are watching history being made in this country.  What you know is that under communism, Albania had the shameful problem of communist leaders sending innocent people to the most terrible prisons at Spaç, at Burrel, and at Qafë Bari.

In the last 27 years, this country has faced another problem, the shameful problem of powerful politicians, from both the right and the left, committing terrible crimes and escaping justice, over and over and over again.

It would not be appropriate for me to say whether Saimir Tahiri is guilty or innocent.  But it is incredibly important that you as civil society leaders, you as young people, and you as citizens of Albania discover the truth.  The right to know the truth does not belong to any political party.  It belongs to the citizens of Albania.  Nobody should be above the law!

You are not judges or prosecutors, but you are people who vote.  You gave your trust to this man as a member of parliament and as a senior cabinet minister.  It is your responsibility to demand that the public knows the truth about this case.  If he is innocent, people should know this.  If he is guilty, he should face justice.

Now, let me talk about the reason we are here today — corruption in the education system.

I believe your generation will help to find the solution to the problem of rising corruption in schools and universities.  I love the ideas that you are already putting into practice.  For example, I love your idea to identify the best professors and let everyone know which professors resist corruption and put their students’ education ahead of their personal interests.

As your generation fights corruption, please know that you have our full support.  We are working every day to support judicial vetting, the war against organized crime, and the decriminalization of politics.  Where past generations have failed in the fight against corruption, I am confident you will succeed.

Let me end by thanking all of the members of the Youth Council, the Center for Civic and Legal Initiatives, and particularly the professors and deans who have courageously supported this initiative.