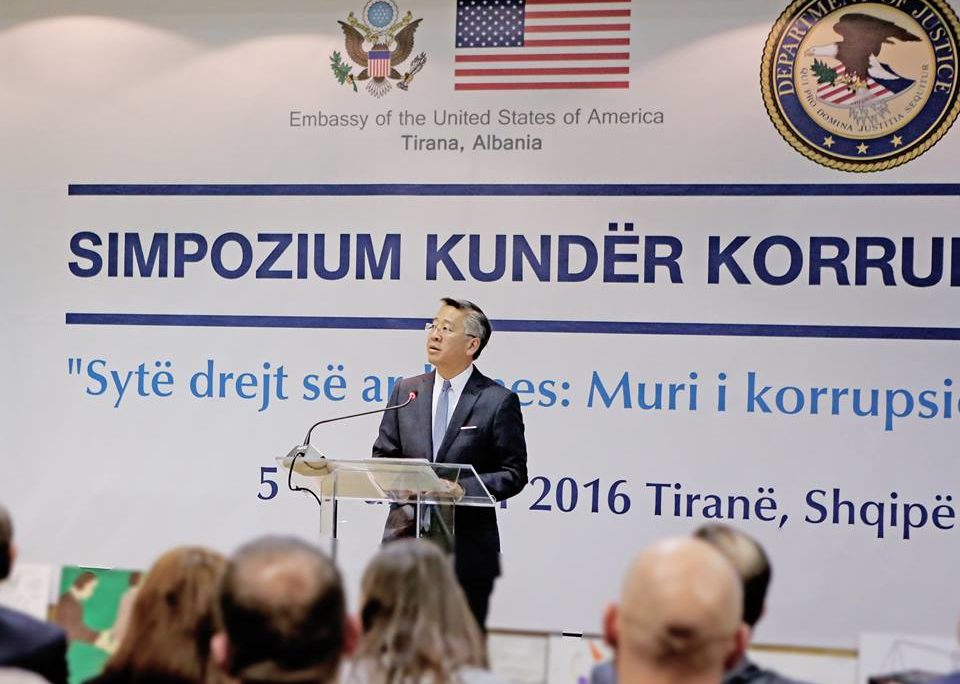 “Eyes to the Future: Breaking the Corruption Barrier” Anti-Corruption Symposium

There is a famous case of corruption in the United States that was uncovered in 2008.  It involved two judges who received bribes totaling more than $2.6 million from private jails for teenagers in exchange for harsh sentencing to keep the jails filled.

One of the victims of this corruption was 17-year old Hillary Transue who in 2007 posted a joke on her social media page mocking the assistant principal of her high school.  Although the posting clearly stated that it was a joke, the judge sentenced her to three months in jail for teenagers for harassment.  Her parents watched in horror as she was taken away in handcuffs.

Over 2,000 young people may have been wrongly jailed and had their lives ruined because of the actions of these two corrupt judges.  The two judges were fired and will serve seven years in federal prison.  All of their cases are now being re-examined.

I use this example to stress the terrible human cost of high-level corruption.  In Albania, every family has a story to tell about how corruption has touched their lives.  Some complain about an insatiable tax inspector forcing them to close their business.  Others talk about corrupt businessmen creating a monopoly in the pharmaceutical sector or controlling politicians to influence a tender or a property decision.  Or how a corrupt judge or prosecutor demanded money, sex or favors for a corrupt court ruling.

In July, the Kuvendi gave to the Albanian people a gift — the passage of constitutional amendments to create the Special Structure on Anti-Corruption (SPAK) and the National Bureau of Investigation (BKH).   For the first time in Albania’s history, these new institutions will provide an independent prosecutorial and investigative capacity to catch organized crime bosses and corrupt senior officials.  They will do this with the support of the United States Government.

But this only works if the people of Albania have high expectations and demand results from these new institutions.

You should expect that many of Albania’s drug dealers and organized crime bosses will go to jail.

You should expect that senior corrupt politicians, from the right and the left, will face justice.

And more importantly, you should expect that drug dealers, organized crime bosses, and corrupt politicians, judges and prosecutors will be afraid.

We see evidence that these people are already afraid and are trying to fight back against this reform.

Because of their fear they are inventing stories and telling lies about the EU Ambassador, EURALIUS and the Constitutional Court.  As Chief Justice Dedja said himself, the Court has already sent a revised translation to the Venice Commission and none of the translation differences were substantial.

All major political parties have put their faith in the judgment of the Venice Commission.  We look forward to its opinion to help guide Albania in its implementation of judicial reform.

Let me conclude by thanking our many participants who bring experience in anti-corruption from Croatia, Romania and exotic Detroit, Michigan – Judge Kora Bumci, Prosecutor Florentina Mirica, U.S. Federal Prosecutor Mark Chutkow and FBI Special Agent Robert Beckman.  We are committed to having a lively and honest discussion over these three days.