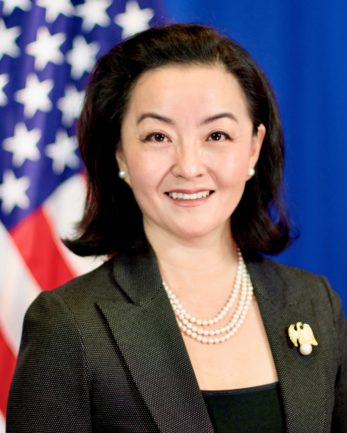 Yuri Kim arrived in Tirana as the U.S. Ambassador to the Republic of Albania in January 2020.  A career diplomat, Ambassador Kim has worked on key foreign policy and national security challenges across Europe, Asia, and the Middle East.  She was director of Southern European Affairs, responsible for Turkey, Greece, Cyprus, and the broader Eastern Mediterranean region, as well as director of the Office of European Security and Political-Military Affairs, responsible for NATO and the Organization for Security and Cooperation in Europe (OSCE).  She was also previously Chief of Staff to the Deputy Secretary of State and director of the Center for the Study of the Conduct of Diplomacy.  Earlier in her career, she was Special Assistant to Secretary Colin Powell as well as Special Assistant to the Assistant Secretary of State for East Asian and Pacific Affairs.  Overseas assignments include Turkey, Iraq, the Republic of Korea, Japan, and China.  Yuri Kim holds a B.A. from the University of Pennsylvania and an M.Phil. from Cambridge University.