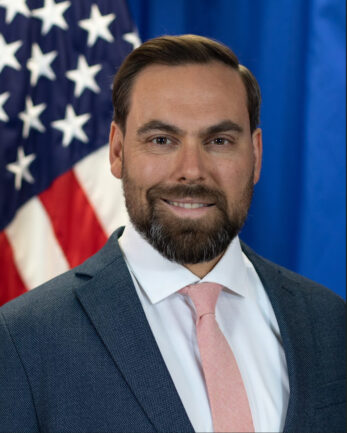 A career U.S. diplomat, Demian Smith assumed duties in July 2021 as Deputy Chief of Mission at the U.S. Embassy in Tirana, Albania. He previously served as Acting DCM and Political & Economic Counselor at the U.S. Embassy in Wellington, New Zealand, overseeing our close partnership and helping lead the U.S. Mission through the horrific Christchurch mosque terrorist attacks and a volcanic eruption.

He was previously Chief of Staff to the Counselor of the State Department, managing special diplomatic projects for Secretary of State John Kerry. His Washington assignments include Special Assistant in the East Asian and Pacific Affairs bureau and the Secretary’s Policy Planning Staff. Overseas, he has served in Thailand, Serbia, and India.

Demian is active in mentoring and recruitment efforts at the State Department, with a focus on Hispanic outreach, and is a member of the Hispanic Employee Council of Foreign Affairs Agencies. He speaks Albanian, Serbian, and Spanish, and some French and German.

Before joining the State Department, he was a director at The Atlantic Council, a middle school teacher, school bus driver, and a chef at a medieval-themed dinner theater.

Originally from Virginia Beach, Virginia, Demian has degrees from the College of William & Mary and the National Defense University. Demian and his wife Susanne Sell have three energetic children and two fluffy cats.