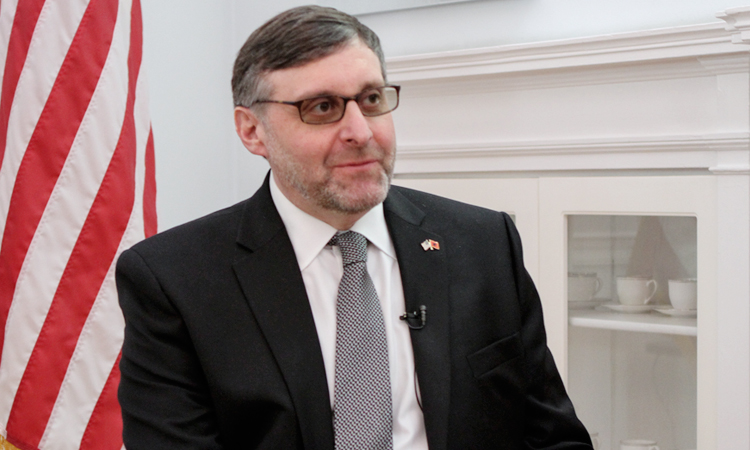 VoA: Mr. Palmer, thank you very much for being able to join this program, for this interview.

DAS Palmer: Thank you for very much for having me on the show.

VoA: I want to start with Albania’s President Meta announced the date for local elections in Albania, October 13th, Prime Minister Rama is insisting on June 30th date. So what is the States’ position on that? Should elections be postponed?

DAS Palmer: We expect the elections to go forward on June 30th. We hope that the conduct of the elections will be smooth and transparent. After the elections there’ll be an opportunity for the Constitutional Court to be formed, and we hope that any disputes about the timing of elections can be worked out through Albanian institutions.

VoA: But what legitimacy will such elections have, since in some of them, in half of the, these things there, it’s only one candidate that will be represented, and basically people are quite worried right now no choice?

DAS Palmer: Listen, it’s certainly less than ideal that there’s a local election being conducted without participation of the opposition, but that doesn’t mean that the elections themselves are not valid. People will have the opportunity to come out and vote and express themselves. Nobody should interfere with that. People who choose to participate, who choose to vote, should be allowed to do so freely. The people who are elected should be allowed to take office and to govern. We will have people out in the field as part of the ODIHR observation mission, and also  independently as part of the Embassy observation team, looking to see what happens on the ground. We do hope that the events of June 30th take place peacefully and in as smooth a fashion as possible.

VoA: Are you concerned about violence on June 30th?

DAS Palmer: Absolutely, and we would call on leaders of the opposition to make clear to their supporters that there should be no violence on June 30th, that nobody should interfere with the rights of the people to participate in the elections, those who choose to do so. Peaceful protest is a part of democratic governance; that’s perfectly normal. We saw on the 21st of June that the opposition is entirely capable of making its case peacefully and in a manner that is consistent with democratic practice. We’d like to see the events of June 30th move forward with no violence, and we would urge the leaders of the opposition to make that clear to their supporters.

VoA: In the past, you have said that people, especially leaders of the opposition, should be held accountable if they do not, if violence happens there, they should be the guys to be responsible for that. Now, there has been a report in the media there that, excuse me, the leaders of the two main opposition parties, the DP party and the LSI, that if they use force to try to block Sunday’s elections, their parties are at risk of being placed at the designated list in U.S.. Is there such a risk?

DAS Palmer: Interfering with elections could be grounds for exclusion from the United States, and beyond that I can’t get into hypotheticals, but yes, absolutely. It is the responsibility of the opposition leaders in this circumstance to make clear to their supporters that violence is an unacceptable tool. We’d also like to hear the same thing from, from the government. This is something that you can’t say enough. It’s important that everybody in Albania hears this clearly from the leaders that they look to for support and guidance. It’s important that they hear it from the international community, including from the United States. It’s something that I have said many times and will repeat here again: violence is unacceptable.

VoA: Before announcing the new date, President Meta met with a few representatives of main embassies in Tirana, but looks like he did not invite the representatives from the U.S. Embassy or the Italian Embassy. And in the past, Meta has made some rather harsh criticisms against international community, and I’m quoting here, he has said that, “If someone wants a one party election, they should go to North Korea,” or he has said that he has “cancelled elections in Albania, not in U.S. or any other country.” How do you respond to such criticism?

DAS Palmer: Well, again, ideally, we’d like to see an election that included the opposition as well as the government parties, and we made that point clearly and forcefully to the opposition leaders in advance of the decision to boycott this election. It’s unfortunate, but that doesn’t mean that the election itself should not go forward. After the election, there will be an opportunity to form the Constitutional Court. It’s entirely possible that the court will decide that the elections should be re-run, but that’s for the court to decide and not individual politicians.

DAS Palmer: Well, I think there’s a couple of things that we would hope to see, come July 1st. One is a dialogue between the government and leaders of the opposition on electoral reform. There’s a blueprint for electoral reforms consistent with the ODIHR recommendations, and we would like to see agreement on a path forward to electoral reforms that allows for future elections to be conducted in a manner that has broad support and in a transparent and accountable fashion. We’d like all of the parties to reaffirm support for justice reform, which is fundamental to Albania’s European aspirations, and we’d like to see the formation of Albanian institutions, including in particular the Constitutional Court that will allow for the smoother functioning of the Albanian democratic process.

VoA: Let me ask a couple of other questions. Since the intercepted phone conversations between Socialist officials and other members of their party show that allegedly they have abused their powers and they might have violated election laws by putting pressure on the voters, do you have any comment on this?

VoA: And one last question. The Socialist government of Prime Minister Rama has been involved in a few scandals, so the use of the… I don’t want to mention all of them one by one. Does he bear any responsibility for the state that Albania finds itself at today, after all he has been in power for six years?

DAS Palmer: I think there’s enough responsibility to go around for all of the leaders to accept their fair share. What we’re interested in is a path forward to Albania’s future. The disputes, the political disputes, need to be resolved not by international actors, outside forces coming in to resolve differences or referee disagreements, it should be solved by Albanian institutions. This is a NATO member, it’s an EU aspirant, this is an important partner for the United States, and we would like Albania and Albania’s leaders to take responsibility for managing the political challenges that Albania is faced with.