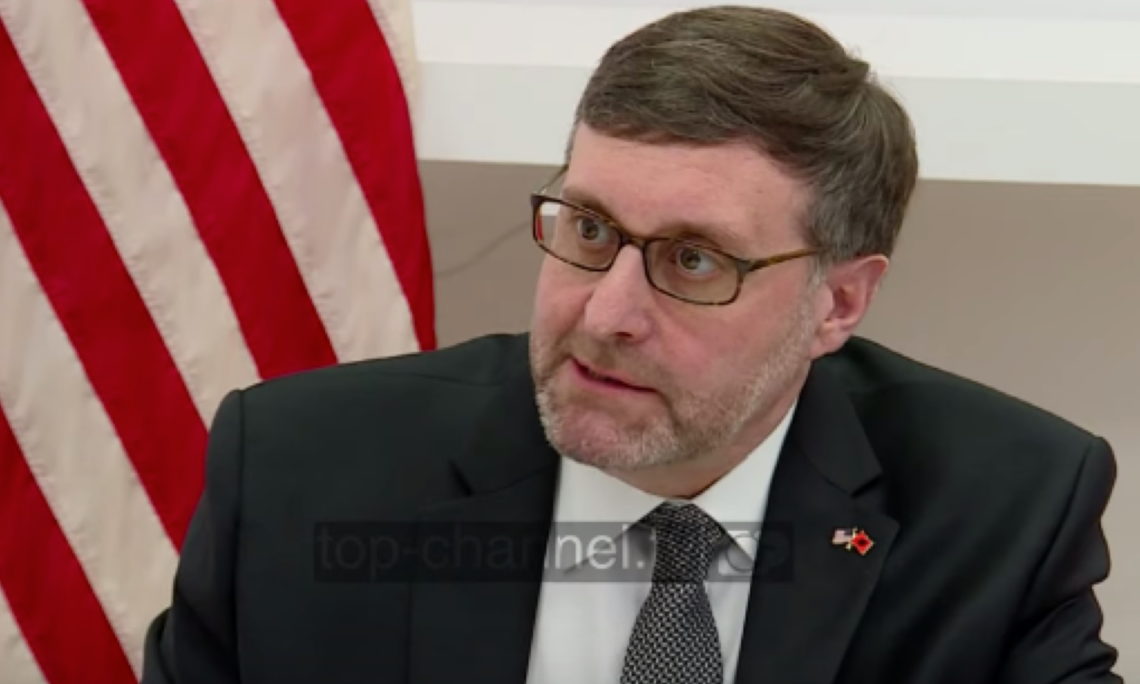 Mr. Palmer, from your last visit in Albania with the regard of Albanian political crisis, has anything changed in your position?

The U.S. position has not changed regarding the political situation in Albania. The burning of parliamentary mandates, the boycotting of elections, the violence we have seen in politically-organized rallies are fundamentally at odds with democratic practices.  As I said during my visit in April, and I’ll repeat it for you now, the opposition parties should look for a path to dialogue with the government about electoral reform. They should work together with the authorities to address the recommendations that OSCE/ODIHR issued after Albania’s 2017 and 2015 elections. These are a number of issues, including vote-buying, voter intimidation, and other practices, that must be dealt with and electoral reform is the only solution.

Mr. Palmer, during your last visit in Albania you made it clear that violence during the opposition protests is not acceptable. At the same time, the U.S. Embassy in Tirana constantly has urged for peaceful protests without violence. But such requests have not been taken into consideration by the organizers of the protests. Are you disappointed about all this?

Let me be very clear, violence has no place in a democracy. The United States respects citizens’ democratic right to demonstrate peacefully. Provoking physical altercations or using explosive devices as a means of protest, however, is not only undemocratic, it is unlawful.  Aiming firecrackers and Molotov cocktails at police officers and public buildings are not peaceful acts.  Those who engage in these violent activities are committing a crime and should be held accountable.

We have called again and again on opposition leaders, in particular Democratic Party Chair Lulzim Basha and LSI Chair Monika Kryemadhi, to publicly condemn the violent acts of their supporters, to cooperate with investigations aimed at identifying individual perpetrators and holding them accountable, and to ensure all future public protests are orderly and peaceful.  The violence perpetrated by protesters is at odds with the stated intentions of the opposition parties to have a strong European democracy.

I want to be very clear with Mr. Basha, Ms. Kryemadhi, and others in their parties. If there are acts of violence in future protests, we will consider them responsible. It has been clear in the past that when the leaders want the protests to be peaceful, they have been peaceful. Violent demonstrations are damaging Albania’s democratic reform efforts and the country’s prospects for moving forward on the EU path. The United States urges all sides to step back from confrontation and engage in a constructive dialogue aimed at bringing an end to the political impasse.

Is the U.S. State Department trying to negotiate in any way between the GOA and the opposition to bring them to the table of dialogue?

No.  We have offered our honest counsel on a way out of the impasse.  However, the time has come for Albanian leaders to leave their political interests aside and work for the future of Albania.  The United States will not negotiate a resolution for them.

For the Albanian politicians who directly or indirectly support and promote violence during the protests, are they going to have any consequences from the U.S. government, such as putting them on a blacklist or denying them U.S. visas?

The incitement of violence by anyone is an affront to the Albanian people that should be condemned by all  We have made clear our opposition to violence as a political instrument.  Obstructing an electoral process potentially constitutes grounds for ineligibility for entering the United States.

Who are the Albanian politicians on the U.S. “blacklist,” with revoked U.S. visas?

I cannot talk about the specifics of any particular visa case. However, I will underscore the U.S. commitment to using all tools available to support the fight against organized crime and corruption as well as to promote accountability, transparency, and good governance. That includes the use of certain visa sanctions authorities when appropriate.

Mr. Palmer, on February 2019 you made two phone calls to Mr. Lulzim Basha and Mrs. Monika Kryemadhi asking them not to abandon the parliamentary mandates. In Tirana as well, you asked them to stay far away from violence during the protests. Your friendly suggestions are ignored. Is it fair to say the Albanian opposition has placed themselves in a strong collision course with the U.S., which is considered our great ally?

We would like to see the government undertake the necessary constitutional reforms to make Albania a stronger democracy.  We have worked with all Albanian leaders to achieve these important goals, and will continue to do so.

The United States and Albania are great allies and friends, but there are times when we disagree.  And we can agree to disagree.  However, it is our expectation that when we do disagree, every political actor who considers himself or herself a patriot and has the interests of the Albanian people at heart to exhibit responsible behavior. This means responsible words and responsible actions, to disavow violence and find solutions through democratic institutions.

Should the local elections of 30th of June take place or should they be postponed as the opposition has asked?

The date of the election is a decision for Albanians to make, and the June 30 date was determined through Albania’s established procedures.  We are planning to have teams of U.S. election observers both as part of the ODIHR mission and our own to observe the June 30th elections. This is part of our normal operations and something we have done in Albania since 1992.

The opposition has boycotted the local elections; are you going to recognize such elections without the opposition? Prime Minister Edi Rama is saying “whoever will try to stop people going to vote in polling stations will commit an electoral crime and will be not able to travel to the U.S.” Does any American law support such claim by PM Edi Rama?

When I was in Tirana in April, I encouraged the opposition to participate in elections, to take its message to the people, to win positions in government, and then to use victory as the vehicle for delivering on its commitments and vision for the future.  It was the decision of opposition leaders, and their decision alone, not to register for the June 30th elections.  You cannot win an election you sit out, and using a boycott to hamper the municipal elections of an entire country is not helpful to building stronger democratic institutions.  We have cautioned opposition leaders against actively obstructing the electoral process, which as I have noted could constitute grounds for ineligibility for entering the U.S. On election day, our Embassy teams will deploy to polls for election monitoring.  We plan to review the election monitoring reports of our embassy teams as well as those of ODIHR.​

Do you think the Government of PM Edi Rama has done enough to solve this political crisis?

Albania has a duly elected and legitimate government. We think it is unfortunate that the opposition decided to walk out of parliament and refuses to participate in local elections.  It is also unfortunate the parties refuse to engage in dialogue without preconditions, which makes a resolution very difficult.  To the extent possible, we encourage all parties to seek a way to navigate an exit from this political impasse.

What is the view of the State Department about how justice reform is going and do you have any concerns?

Allow me to reiterate what I said when I was in Albania in April. Justice reform for the United States represents a path forward for the Albanian people to a better future, to a European future of peace and prosperity, and a relationship of accountability between the people and their government. It is the heart and soul of all of the reform efforts here. It is something that the United States has invested a great deal of effort and energy in, something that we see as central to Albania’s aspirations and Albania’s future.  Justice reform is legitimate, constitutional, and irreversible.

Right now, new justice institutions are being established. The United States is committed to helping strengthen these institutions and working to ensure that nobody is above the law. The law should be applied equally and equitably, to ensure judicial accountability.

Of course we would want SPAK and the NBI established and functioning as soon as possible.  We recognize this is a long and challenging but necessary process that must be done the right way.  We also want the Constitutional Court functioning normally, but vetting has shown that the previous judges exhibited corrupt and problematic behavior, and the path forward cannot include a return to politically appointed judges.  Soon President Meta will have the chance to choose a new Constitutional Court judge from a list of qualified lawyers.  Albania is close to finalizing an independent justice system that will benefit Albania and Albanian citizens.  It must stay the course.

Do you support Albania in opening accession negations with the EU and how do you see the position of some EU countries against that?

We fully support the European Commission’s recommendation to open accession talks with Albania, based on its fulfillment of the conditions set by the European Council last year.  We also agree with the Commission’s findings that Albania has made tangible progress in implementing justice reform and taking action against organized crime and corruption.

There is still much work to be done but it is important to recognize the reforms that Albania has made.  The final decision will be up to the European Council, but we fully support the opening of accession talks with Albania.

No matter the decision this year, the United States remains committed to working with our Albanian and EU partners to ensure Albania’s successful EU integration, including our full support for the ongoing implementation of the legitimate and constitutional judicial reforms.