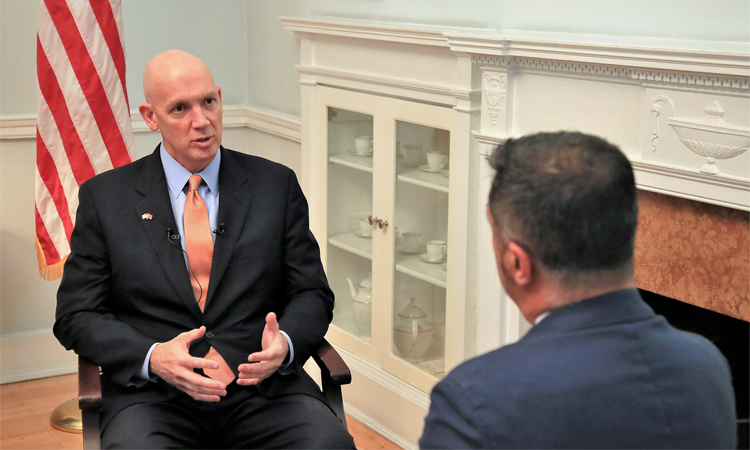 VOA: Mr. Andrews, thank you for this opportunity. What is the purpose of your visit?

DAS Andrews: Thank you very much. It is great to be with you today. I am representing a bureau of the U.S. Department of State – the Bureau of International Law Enforcement and Narcotics Affairs. We’re responsible for implementing civilian security and rule of law justice sector assistance in countries all over the world. We’re in 90 countries. We’re very proud to partner with Albania and with Albanian police and justice sector, as they undertake reform efforts to improve the quality and quantity of justice that they are providing to the citizens of Albania.

VOA: The State Department report on anti-narcotics stresses that Albania is increasingly a transit country for cocaine and heroin. Why is that?

DAS Andrews: A number of reasons. I think the ways in which the drugs are produced and trafficked around the world are changing. I think there has been a proliferation of not only the types of drugs being produced, with all these new synthetic drugs, but that with the globalization of all of the logistics, corridors, and networks, there has been a proliferation of trafficking routes as well. And so, transnational criminal groups have more opportunities to produce and move drugs around the world. So, it should not surprise us that transnational criminal organizations, including the ones in Albania, are taking advantage of these tools in the globalized world.

VOA: The report says that widespread corruption limits the effectiveness of the fight against narcotics. How do you see the efforts of Albanian authorities in the fight against organized crime, drugs, and even money laundering and what else do you expect?

DAS Andrews: I’d like to pick up on your comment about corruption first and what I would like to start by saying is that we’re all human beings. It doesn’t matter what country you come from, if given the opportunity, a certain percentage of people will choose to be corrupt, if we don’t have strong, capable, trustworthy institutions that create the proper incentives for honest behavior and disincentives for improper behavior. One of the things that we work with our counterparts in Albania as they undertake various anti-corruption initiatives, we try to help them build out the institutions that will deter people from being corrupt. Because, in our view, corruption is the one thing that undermines everything in society. So, whether you’re trying to create a good business environment, to encourage investment by foreign companies, that will create jobs for Albanians, or whether you’re trying to conduct your government and provide services for citizens – all of those things are undermined by corruption. Corruption imposes cost and in the globalized world in which we live, our countries can’t be competitive if we’re corrupt. We can’t compete for business, we can’t compete for opportunities, if we’re paying an extra price because of corruption. So, our Albanian counterparts in the justice sector, in the police and elsewhere are looking at various anti-corruption measures. Doing that will also make them stronger against transnational criminal organizations to reduce the amount of human trafficking, drug trafficking, and other criminal activities. So these things are all kind of part of creating a better, stronger, more capable justice system.

VOA: Justice reform envisages the establishment of special structures to fight organized crime and corruption, as well as an FBI-like investigative unit. What are your expectations for these two new bodies and what concrete support will the U.S. offer in this regard?

DAS Andrews: The United States Government, including the office that I represent – INL – as well as our partners in the Department of Justice are very supportive of Albanian efforts to stand up these new anti-corruption structures. We have worked hard to help Albania create the selection process, make sure the people who are brought into these structures have been vetted, and behave appropriately once they are part of those structures. The idea is that once these structures are founded and stood up with the right people, that they can help Albanian institutions become stronger and more transparent and provide better services and justice for the citizens. So, our commitment is very solid. We will continue to support these organizations. But increasingly, over time, the national progressions Albania makes will require less and less support as it acquires these institutions and they begin to function well.

VOA: Lastly, it was announced that the U.S. provided $920,000 to improve the prison system in Albania. Concretely speaking, what does this support aim at?

DAS Andrews: I’m glad you asked about that. We’re in the process of designing a program related to corrections. As someone who’s been involved in our correction assistance programs in other countries, I’m quite familiar with this type of work. Generally, when we engage in corrections, it is part of a larger effort to reform a justice system. The Government of Albania has a considerable amount of political will invested in reforming the entire system. We observe in other countries that if the police are reformed, that does you no good if the courts and prisons are not reformed. And if you get the police and the prosecutors and the judges all reformed, but you haven’t done anything with your prisons, even though you can arrest, investigate, and convict an organized criminal, that person can then go to jail and still run their criminal enterprise on the phone. So, corrections is a key part of that justice sector reform effort and our interest is in standing up a program that helps ensure that the government can actually control its prisons and ensure that the prisoners are not running their criminal enterprises from prison.

VOA: Thank you very much for this interview.