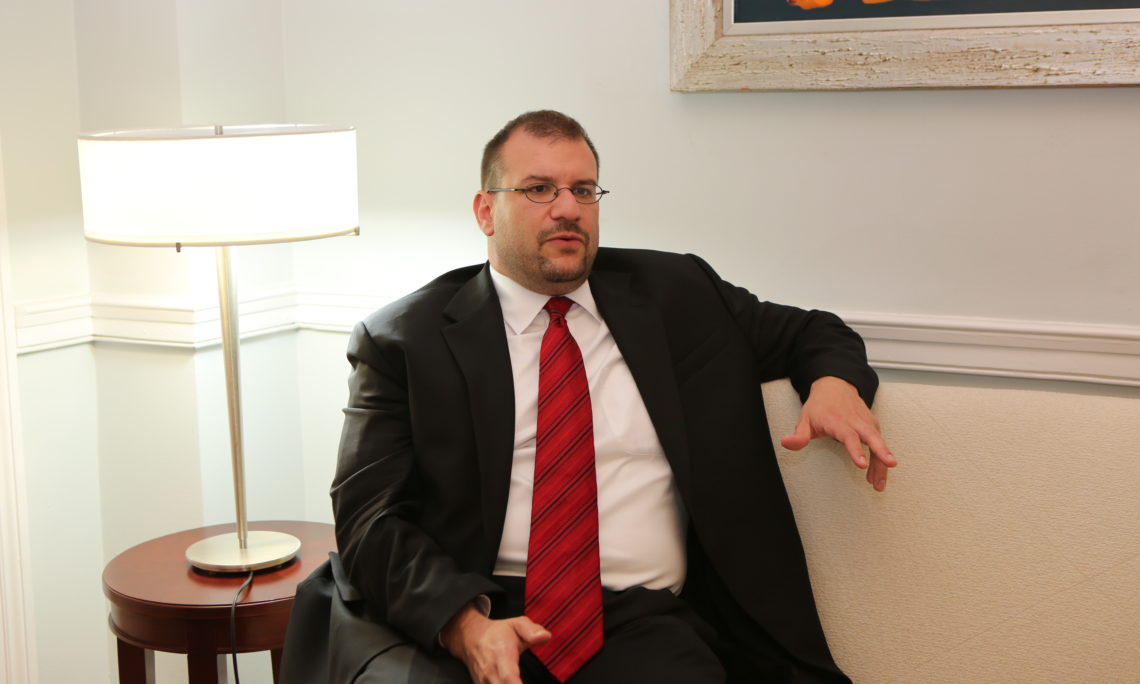 Deputy Chief of Mission Muniz during the interview with Panorama Newspaper

Panorama: Albania has been visited by President Bush and several secretaries of state. Recently, PM Rama met with President Obama and VP Biden. Press statements about the meetings have only talked about diplomatic as well as military cooperation in the context of NATO. This kind of relationship that is confined to the diplomatic realm, is it the result of a lack of requests from the Albanian Government or businesses or is there some other reason that the economy is not talked about in these meetings?

David Muniz: First, I would say that our relationship is not confined to the diplomatic and political realm even though it may sometimes appear so.  As you know, in high-level engagements and in the public messages that come from those engagements, there tends to be a focus on strategic highlights.  The issues you mentioned – diplomatic and military cooperation – are very much at the top of our bilateral agenda.  This does not mean that other issues are not discussed.

However, your question about the economy is very astute.  The U.S.-Albanian economic relationship is not as robust as I think either side would like it to be, for a lot of reasons, some of which are not entirely within our control.  For example, ongoing global and regional economic challenges, the low price of oil, and other factors limit the interest of American investors to consider opportunities in Albania.  There are other factors, though, that are easier to influence and change.  I can say that there are a few steps which, if taken, could improve the investment climate – we know the government is looking at ways to do this.

I do want to add that, in my opinion, Albania has great potential.  I am constantly asked about this by Albanians, who sometimes do not see the potential their country holds for economic development.  Albania’s geographic position and access to the sea are huge advantages.  Albania has natural resources, including potentially very significant amounts of oil and gas, that are nowhere near fully-developed.  Also in the energy sector, the progress moving forward on TAP is another important positive story.   The climate is favorable and the soil is very rich – almost anything can be grown here with success.  The Albanian workforce has a high proportion of multilingual workers available at a relatively low cost compared to other European countries.    Albanians are generally favorably disposed towards foreign visitors, which, combined with other factors, creates great potential for tourists.  There is also a sizeable diaspora with money to invest.  And all of this in a country of around three million people.  Finally – and this is something many Albanians do not focus on, because it has never been an issue here – this country is not burdened by the same issues that the ex-Yugoslav countries suffer from, and is thus freer as an economic actor in this region.  All of this is very positive, but of course work needs to be done to help Albania reach its high potential.

Panorama: Is there a disconnect between the political and the economic dimension that the U.S. seek in Albania? In other words, when we talk about relations with Germany, Italy or even remote Japan, immediately we mention funding from them that goes up to billions for Albania. Meanwhile, the only manner in which American influence is perceived is the political one.

David Muniz: I wouldn’t say that there is a disconnect, but there is certainly a different level of intensity between the political and economic features of our relationship, and this is a consequence of normal economic behavior.  Germany is geographically much closer to Albania and the region, and it follows that German firms see a wider range of opportunities here – opportunities that make more business sense – than American firms.  This is even more true for Italian firms, given the long and well-developed economic relationship between Italy and Albania and the close proximity.  The same kind of investments that firms from these countries might pursue – light manufacturing, customer-service, etc. – just don’t make as much business sense for American firms, because they do not offer the same potential.  What you often see from American companies here is potential investment in services and possibly for exports of consumer goods.  This is still a small and developing economy, however, so the profit potential for American firms is more limited.

Panorama: Why aren’t there American investors and why are the very few ones already here leaving? (There was a statement by the head of AmCham – an American billionaire is leaving Albania due to lack of cooperation with Albpetrol). As an Embassy, do you have complaints or requests from American investors that remained on paper and were not able to find cooperation with local authorities to realize their investments?

David Muniz: We certainly have some concerns about the business climate in Albania.  Many of them deal with the legal system.  You will not be surprised to hear that we have many complaints from investors about the enforceability of contracts and corruption in the court system.  This is an important point.  We have spent, over the last year, a considerable amount of time discussing the issue of justice reform and how important this reform will be for Albania’s future.  This is not just about criminal justice, though – justice reform will be critical to improving the investment environment.  We are not the only foreign mission in Albania to have concerns about how investors are treated in the court system.  I can tell you that the government is well-aware of the benefits of reform for the economy.

Related to concerns about the judicial system, U.S. companies also regularly raise concerns about corruption in Albania.  By U.S. law, U.S. citizens or companies that bribe a public official can be fined or put in jail.  Our companies take this very seriously, so when a country consistently ranks amongst the lowest in Europe on the Corruption Perception Index, it definitely has a chilling effect on U.S. investment.

When we talk about enforcing contracts, one very important aspect is the need to honor international arbitration.  Many international firms opt to include such arbitration in their contracts, and any sign that a government would not honor such a process is taken very seriously (and negatively) by the international markets.

Also related to this is another well-known issue – property rights.  We know this is a high-priority issue, but I can say that many potential investors look at property rights and want to be sure that they are able to own property with no legal complications or challenges.  This is especially challenging for the tourism industry.

Tax enforcement has been an issue of concern to American firms, which generally try to stay in compliance with the law and pay their taxes.  In the past, some have complained to us that many of their competitors were not paying taxes.  We have been, as you know, very encouraged by the program led by the Ministry of Finance and the Tax Directorate to increase tax reporting and compliance and get some of the bigger tax-avoiders to start paying.  We are supporting this program with expert assistance provided via USAID, and we encourage the government to continue this program until all Albanian firms are complying with the tax laws.

We also have heard concerns from investors about unpredictable changes in regulations and rules.  To make it easier for businesses to comply with the rules we have encouraged the government to consider reducing the rate at which it changes regulations and to engage in dialogue with the business community before making any changes.

The public tendering process also generates many complaints from U.S. firms.  We regularly advocate for fair and transparent tenders with guidelines that all bidders understand in advance.

Panorama: Due to the communist past and diplomatic conjunctures (Albania is a new NATO member), there is a perception in Albania that on strategic sectors, diplomatic interests should come before financial interests. I am referring to the Chinese expansion in the Balkans but also in Albania. There are at least two large Chinese companies that are negotiating to buy the shares of the only airport (Rinas) and the largest oil company Bankers. How does the Embassy view this development?

David Muniz: In general, we think American investment brings with it a certain set of high business and legal ethical standards.  This is also true of investors from some other countries as well .  It’s important to have a well-functioning regulatory system to ensure that investments are being made within the law and that they benefit not only the investor, but the host country.

While it may be good that Chinese companies are investing in Albania, I would suggest that the government take a very close look at why two major North American companies are seeking to leave the country rather than expand their presence here in Albania.

Panorama: Lastly, there is a strong debate going on in the media about the Panama Papers. Reports of international investigative journalists have discovered documents about two Albanian companies or at least 22 shareholders whose money is in offshore areas. Does the Embassy have information about unlawful activities of Albanian companies, politicians or senior officials related to them?

David Muniz: Unlawful activities generally are, of course, an issue of great interest to the Albanian public, as it should be.  As you are well aware, our main purpose here is to represent and advance U.S. interests.  To the extent that any company or individual in Albania might represent a threat to American interests, via illegal activity or criminal behavior, we would be interested to know about it and respond accordingly.  Should the Albanian authorities request the assistance of the U.S. government in identifying illegal activity by Albanians that is somehow connected to the United States – for example, trying to hid assets there – we have been and would always be happy to provide such assistance.  Especially given that we are allies, the United States wants Albania to have as strong and vibrant a democracy and economy as possible.