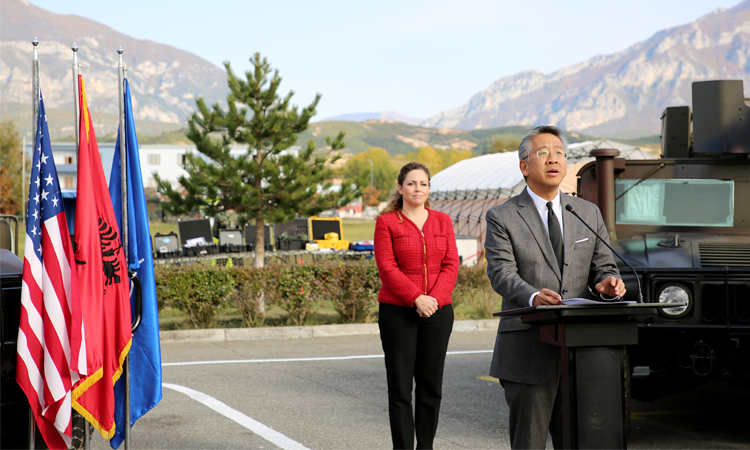 Albanian soldiers and sailors are true heroes.  This has never been more clear than this week when Albanian sailors on the navy ship the Oriku saved the lives of 100 Syrian refugees, including 39 children.  The Oriku has been serving in a NATO maritime operation in the Aegean Sea for the past year.  During that time, they have saved the lives of more than 800 people.

As your NATO ally, we are proud to see your new Defense Minister and your new Chief of the General Staff investing in building the future of a strong Albanian armed forces.

How are they investing?

First, they are investing with money.

For the first time since Albania joined NATO in 2009, we are seeing a large increase in the proposed defense budget – more than 8 billion leke more than last year.  This is a priority shared by the government and opposition, by the President, the Prime Minister and the Parliament.  Bravo.

Second, they are investing with technology.

Today’s delivery of these armored vehicles and the display of sophisticated NATO-standard rifles, an American bomb disposal robot and bomb protection suits represents only a small fraction of the modern weapons and equipment being introduced to the Albanian Armed Forces.  It is a great time to be a solider or sailor in Albania.

And third, but most importantly, they are investing in people.

We have today with us First Lieutenant Sajmir Cuka who is only the second Albanian ever to graduate from the U.S. Military Academy at West Point.  This is the place where all of our most famous American Army generals have graduated.  First Lieutenant Cuka also completed the U.S. Special Forces high-level course and is today an Albanian Special Forces Team Leader with combat experience in Afghanistan.  He represents the future of the Albanian Armed Forces.

We are also proud that Albania is increasing its essential training opportunities with many NATO allies.  For example, General Kollcaku, Land Forces Commander General Cahani, and Air Force Commander Avdiaj are all distinguished graduates of Defense colleges in the United States.

I am proud to announce today that we will be increasing our military training budget for Albania next year by more than thirty five million leke in recognition of Albania’s commitment to NATO.

Finally, I have the honor to announce that our new Secretary of Defense James Mattis has invited your new Minister of Defense Olta Xhacka to lead a high-level delegation to the Pentagon in January to discuss how we can expand our military relationship and the support we can offer to the Albanian Armed Forces.