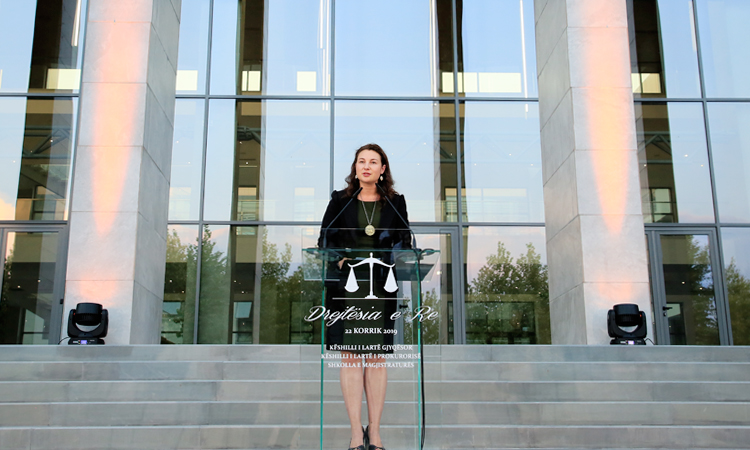 It is a pleasure to be here today to mark the 3rd anniversary of the passing of Justice Reform and the inauguration of this building that will house the High Prosecutorial Council, the High Judicial Council, and the School of Magistrates.

July 21, 2016 began with expectations of a morning vote in Parliament on the Constitutional reforms.  These reforms had been in motion for almost two years.  After all-day negotiations, the DP approved the draft.  Then-Speaker Meta thanked Mr. Basha and Mr. Rama and praised them for their maturity during the negotiations, and said that the draft was ready to be approved.

The voting began after midnight on July 22.  It was unanimous — everyone voted to make these historic changes.  That vote shows what Albania’s leaders can do when they work together for the common good.  By 1am, Albania had a new future, because Albanian politicians had the vision to tackle corruption together and move forward toward realizing EU accession dreams.

That was three years ago.  Much has happened since.

Albania passed laws to implement the Constitution and then established a commission and appeals chamber for vetting.  The European Union and United States established the International Monitoring Operation.  This model of vetting judges and prosecutors has been the foundation for the rest of the reforms to take place.

Now, a large number – over 15% – of judges and prosecutors have been vetted.  Some have passed and many have failed.  That includes judges on the High Court and Constitutional Court.  Some say that’s a problem, but we believe it shows that vetting is working and underscores why judicial reform was necessary:  The old justice system had been captured long ago.  It was captured by corruption and by those who operate in the shadows to hold Albania back.  Judicial reform broke that illegitimate hold on the justice system and is returning it to the people.

This building will soon look upon an Albania with able, ethical judges and prosecutors.  It will look upon an Albania with a SPAK and NBI doing their part to rid this country of corruption and organized crime.  And Albanians will look upon this building as a symbol of the success of judicial reform.  The young prosecutors being sworn in today will see great changes in Albania over their lifetime.

Thank you very much for this opportunity!