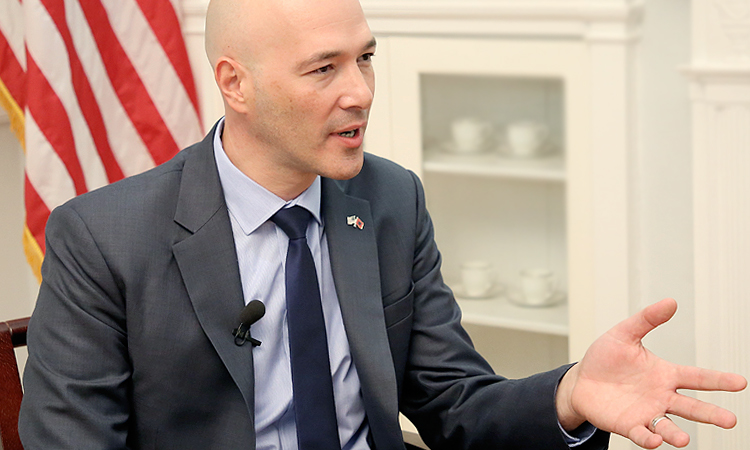 Gjon Junçaj: Let me answer this in English as I can answer it more deeply and more clearly. I think that there are many obstacles. One is that Albania is a small country; it’s difficult to conduct a serious investigation, a big one, because secrets get out, and Albanians know each other pretty easily in a small country like this. It’s also difficult to have people that are willing to be witnesses in a case, whether they are part of the criminal activity or simply people that witnessed it. But I think that the main problem is that there are many powerful people in Albania that have different ways of putting pressure on prosecutors. Let me say this: we have to recognize the successes that the serious crimes prosecution office has shown, at least since I’ve been here and what I’ve seen with my own eyes. Within the last two years, we have a High Court judge and her husband who was convicted for corruption. Importantly, they took the 50,000 Euro bribe that was paid in that case. We recently had a Court of Appeals judge who was, for the first time, convicted for corruption – 30,000 Euro bribe in that case. And what’s important to remember about this case is the conviction but also, for the first time, a prosecutor, with evidence, went to a judge and asked for a search warrant – to go to a judge’s home and look for cash, the bribe money. And what he found was not 20,000 Euros but almost 200,000 Euros, in cash, in the house. That judge has to explain where this money came from. There are also three judges that have been taken to court recently, from the Court of Appeals in Durrës, who amazingly are accused of accepting trips overseas to watch soccer matches. Those judges have been suspended. We’ve seen movement in organized crime cases – the Shullazi conviction is significant and other dangerous people are being investigated. But most importantly, what the Albanian people want to see is that when there are indicia of criminal activity at the highest levels of government, that prosecutors will investigate it. We know that there is active investigations into the former Minister of Interior, the Prosecutor General. It’s important not that they’re just being investigated but that this will be full investigations, that they find all the evidence that’s there or not there, but that they do it seriously and this is what the Albanian people expect.

Do you think our prosecutors have enough professional education to continue investigating about these crimes or cases of corruption?

Do you think there are differences between American prosecutors and Albanian prosecutors, not just in education, but also in the attitude of looking at and investigating about corruption especially that is very spread in Albania?

Gjon Junçaj: An American prosecutor like myself, if I am serious about my job, there’s nothing that can stop me from taking a case and investigation and finding everybody responsible in a case, all the way to the very top, if necessary. In America, as a prosecutor I am awarded for this, my career will advance. I think an Albanian prosecutor does not enjoy the same sort of certainty about their career if they do that. Let’s be clear about something: there are good prosecutors in Albania that have been in a bad situation and there are also bad prosecutors and judges in Albania that don’t deserve to represent the people of Albania anymore. I think that one way or another, they will find their way out of the system, but soon I think Albanians should expect, Albanian prosecutors should expect that they will be in a system that’s better protected from the real problem in Albania and that’s politics. For decades, politics has tainted the justice system and I think that’s going to change for the better in the future.

Do you think that the package of justice reform will function, it will be implemented? …it has taken and affected in public the life of many persons, the way how it was approved in parliament, how the system started to work step by step? I mean the first institutions that we are waiting to be built up from this package?  So do you think that in the bottom line we will have the full package implemented in Albania?

Gjon Junçaj: I do. There are many people that are responsible for this. I think that if politicians and politics want justice reform to succeed, it will succeed. And I think we all agree that justice reform is the best path forward. I also think though that if the politicians do not want it to succeed – let me be clear about this – I think it will still succeed. Because the Albanian people support it, the United States support it, the international community supports it…I view it as a train that is moving forward and you’re either going to be on the train or you’re going to be in front of the train. But it’s moving forward.

Do you think there are obstacles to SPAK especially and the NBI in Albania?

Gjon Junçaj: Well, certainly we have to keep in mind that SPAK, the BKH, the special prosecutor’s office, their main priority is to go after corruption, especially high-level corruption and organized crime, and all those people now are going to be doing everything that they can to stop the progress of the reform, even people that may be out supporting it publicly, they have different plans behind the scene, but it’s going to move forward. That train is moving forward. I can tell you that the United States will remain committed to that mission. The Embassy of the United States did not leave with Ambassador Lu; this is a United States priority. We will train, we will mentor, we will support and we will be watching all the way through with SPAK and the BKH.

Albanian prosecutors, maybe some of them you’ve been assisting during your time here in Albania, they are watching you right now. Do you have a message for them?

Gjon Junçaj: I do. I feel privileged to have spent that time with them. First of all, I want to say that I have always been welcome, and this goes back all the way to the former prosecutor general’s time to this very day. The message that I have for them is this: the time…and this is especially to the prosecutors that are good prosecutors, that want to do the right thing…their time is coming. They are going to have an opportunity to be the next class of heroes of this country. I think it’s been – it’s fair to say– maybe 100 years, it’s been a century since there’s been an opportunity for new heroes to step forward and push Albania in the right direction. And it has to be now and these prosecutors and judges, they have to stand up and make themselves available. A specific request to the prosecutors that are thinking about applying for the SPAK: if you’re this type of person that is interested in serving your country and creating a better future for your children, then stand up, move forward, and the United States, the international community, and most importantly the people will support you.

You are going back to the United States, your country, what will you be missing about Albania?

Gjon Junçaj: What will I be missing about Albania? The people, especially the young people. I see hope in their eyes. I see people that deserve a country that they don’t want to leave. I see people that if they’ve already left the country, I see creating a place for them that they want to return to and we should do this because they deserve it.