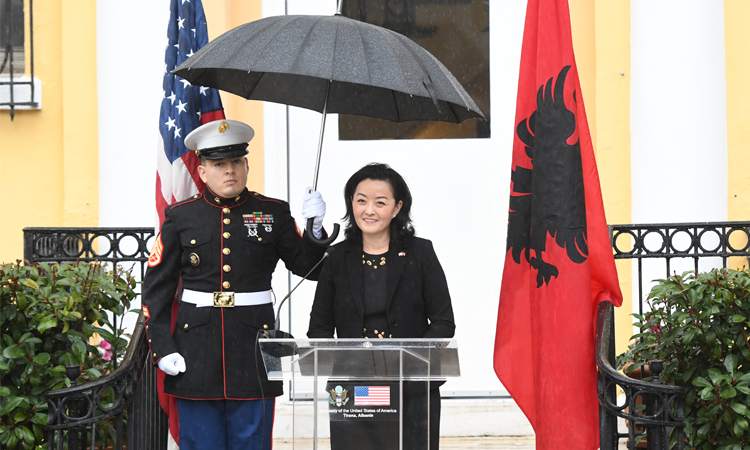 I am honored that President Trump and Secretary of State Pompeo have entrusted me to represent the United States in your great country.  As America’s Ambassador, I look forward to getting to know you, your history, and your culture.  We are friends, allies, and partners.  As I said during my Senate hearing, few friends have embraced America more warmly, few allies have been more loyal, and few partners are as ready and willing to do more with the United States than Albania.

I am also honored to stand today in front of the U.S. Embassy.  Its foundation was laid in 1929, and it continues to stand proudly in the heart of Tirana as a testament to the enduring strength of the U.S.-Albanian relationship.

Our friendship and mutual commitment are deeply rooted.

One hundred years ago, President Woodrow Wilson stood up for Albania, when he prevented the Great Powers from partitioning Albania at the Paris Peace Conference.  The American president used the might of the United States to support an independent Albania, to welcome an Albanian representative to Washington, and to pave the way for Albania to join the League of Nations in 1920.

After World War II, our two governments took different paths.  But even when our governments did not recognize each other, our people remained connected.  We spoke to each other through the Voice of America, which not only broadcast news, but sparked hope.

The spark of hope soon lit up all of Albania, and we stood with you in 1991, as you broke free from the chains of communism and dictatorship.  It is a moment of which you should be rightly proud.

We know that there is hard work ahead, but we also know that hard work is easier with friends and allies.

We will continue to support the unwavering aspiration of the Albanian people for freedom, justice, and a system where everyone must play by the same rules.

I look forward to supporting Albania’s leaders as they take difficult – but absolutely necessary – steps to implement justice reform, prosecute organized crime, and remove corruption from the Albanian system.

I am confident that, as justice and integrity take root, more investors will be drawn to Albania so that we can create more jobs and opportunities for both Americans and Albanians.

The United States values Albania as an Ally, partner, and true friend.