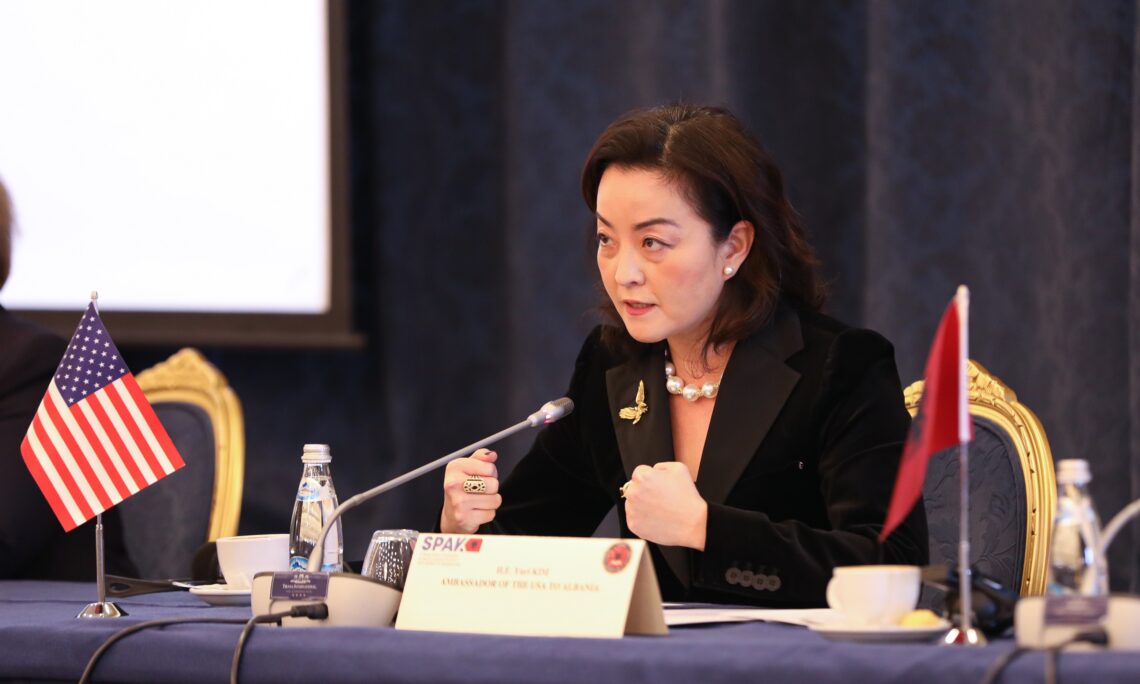 Thank you! Chief Special Prosecutor Kraja and Director Hajnaj, thank you so much for inviting me to this very important event, which is both a celebration, as well as a reaffirmation of the important mission of SPAK and of NBI. It’s also great to be here along my EU counterpart, Luigi Soreca.

When I first came here, in January of 2020, there was an event on justice reform, right in this room, and I think it was our first public appearance together, and I remember saying to the audience then, that I fully associate myself with the comments made by Ambassador Soreca, who had spoken before me. I said two years ago, I say it again today, knowing that whatever you will say next will be exactly what I will believe in as well. And it makes all of us tremendously happy to see the Albanian flag, American flag, and EU flag together. There can be nothing more colorful, nothing more powerful, and more hopeful.

Director Hajnaj and honored Investigators, I remember seeing you in July, for the first group who completed your induction and were about to be in training. I was so inspired then, and remain so today, by your patriotism, courage, and your determination to make a positive change in Albania.

Now, as we close 2021, I am so pleased to return to be with you for this certification ceremony and see you receive your official credentials. And, as we all know, you have already begun your work.

Like the FBI’s first class of 34 agents in America in 1908, you are already building NBI into a pillar that supports Albania’s democracy and fight against corruption and organized crime. Like those first agents, success in this fight will be based on the important work you do each day.

I am so impressed by your sense of duty to take action, on behalf of your fellow citizens, to correct a system that has in the past looked away from corrupt practices, and where individuals have operated with impunity. I am also impressed by your courage to stand up for justice and to investigate anyone who needs investigation, regardless of their position or wealth, to make Albania, not only clear, but stronger and richer.

As you gain experience and successes, your work is also building an NBI that will take its place alongside the American FBI and international peers – showing Europe, and the rest of the world that Albania’s NBI can be a trusted partner in criminal investigations.

Chief Prosecutor Kraja, I would be remiss if I did not take advantage of this opportunity to congratulate SPAK and the Special Prosecutors Office on its two-year anniversary.

The United States government, alongside the Albanian people, want to thank SPAK for your dedicated prosecutors for your unwavering fight against organized crime and corruption.

It is especially fitting that both the NBI and SPO are here together to celebrate important occasions – for it is only together that you can take on and have success in the most significant cases: discovering, investigating, and prosecuting those who seek to harm others while enriching themselves; and ensuring justice for the people of Albania. This partnership and bond between SPO and NBI is what makes SPAK uniquely powerful, and I encourage you to work closely with each other every day to ensure that you remain linked, prosecutors and investigators – work together, move forward together, arm in arm, shoulder to shoulder.

2021 has indeed been a turning point for Albania’s fight against corruption and organized crime. Within the justice reform package, the NBI now opens a new chapter of independent, trusted, efficient, and credible judicial institutions. And more help is on the way from the United States as well. Next year, we will see another class of NBI Investigators joining you in this effort.

We say this often. Justice reform will not be easy, quick, or perfect. But we will continue to move forward, step by step. And when we fall, we’ll get back up. When we see our colleague fall, we’ll help them get back up. The key point is; get back up. Keep moving forward, no matter what anybody says.

And, rest assured, when you work together, with partners far and wide, it will become quicker and easier, and more perfect, over time.

I congratulate you, I thank you, and I encourage you.