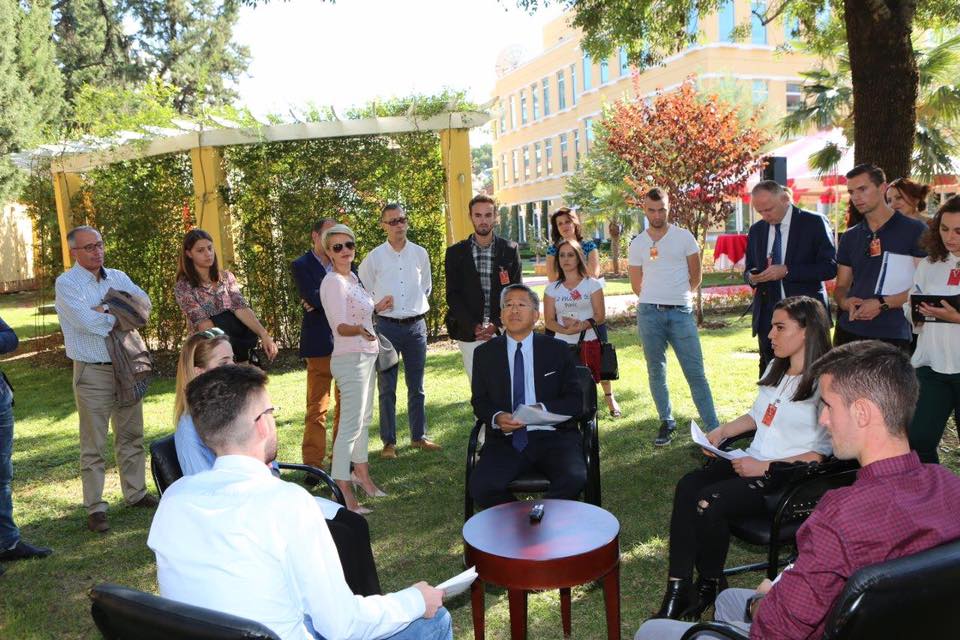 Q: I’m Merxhan. I have finished my journalism studies. I am preparing for my diploma. May I start? We wanted to know about your attitude and your opinion about the cannabis situation in Albania and the political debate related to it. Thank you.

A: The United States Government has pressed the government of Albania and the State Police to do more on the war against narcotics trafficking.  The U.S. Drug Enforcement Agency works closely with the Albanian State Police to fight drug trafficking, with a particular focus on trafficking of heroin and cocaine.  Our ICITAP police assistance program has for many years held a summer camp which helps young people to say no to drugs.  We, the U.S. Government, applaud the efforts of the Italian Guardia di Finanza in terms of their efforts to eliminate cannabis production.  We as an international community should do more against this common problem that we share with Albania, because we know that that problem helps to fuel problems with corruption, organized crime and drug addiction. The question that I have seen several times in the media is about whether the situation is worse today than it was under the last government. And my reaction is, I think both, previous government and current government have a problem with drug trafficking and there are politicians who have benefited from their connections with drug traffickers. And I think it is worth recalling that we know there are several members of parliament, there are mayors in Albania and there were candidates for the position of mayors who had convictions for drug trafficking in EU member states.

Q: I am Klaudia. I come from Vlora and I have graduated at the University of Tirana for Journalism. I will ask something about the elections. Opposition believes that the elections in Dibra have been manipulated. What do you think about this and how can this affect the next year elections.

A: So, the main concerns that I heard about from the opposition and others about Diber are the involvement of criminal groups and the buying of votes. This is now very common in Albania, that we hear this complaint. The U.S. Embassy sent four people to Diber to observe the elections. EU member states sent a team of nine people to Diber and the OSCE also sent international monitors. What I also know is that Albania is becoming a more developed democracy in terms of elections. These foreign observers are a very small number compared to the large number of Albanian observers. And so, whether these accusations are true or not, I would be less concerned about what the foreigners think; I would be more interested in what domestic observers are reporting.

Q: I will speak in Albanian. The moment we came here, we were hopeful. We, the young people are waiting from you to give us hope, to give our Albania that keeps being ridden with problems and suffering. This is why I did not choose to speak in English, to express about my worries as a young man, as we are only a few days away from the opening of the American lottery and we will keep saying we should leave this country as soon as possible; this country will never change. I will leave, these young ladies will leave, this young man will leave. All these people have invested in a school, for a job and we should lay roots here in Albania but our country is not providing the foundations. We could go on and on about this. This is the thing that worries us as young people who are affected by a lot of things and lack of hope in Albania. This is why we look up to the U.S. Embassy to bring us the Albania that we have been wanting for years, that we dream about for years, but we don’t have it and we don’t know when we will have it.

I would like to stop at one point of the justice reform, the vetting issue. The Democratic Party has again taken the Vetting Law to the Constitutional Court. If the Court strikes this law down, will it mean that all the fight you and the other Ambassador, Vlahutin, have put in will be wasted? Can this law be implemented without the support of the opposition?

A: So, it is the constitutional right of the opposition to challenge the Vetting law in the Constitutional Court or to boycott further sessions of the ad hoc committee on judicial reform. We have told the leadership of the Democratic Party that they risk becoming the party that the people of Albania believe is against this reform and is protecting corrupt judges and prosecutors, or judges and prosecutors with whom they have political influence.  I recall the statement made by President Nishani who said in an interview that while he does not like some of the articles in the Vetting Law, neither he nor his legal experts can find anything in the law which is unconstitutional.  We, the United States, call upon all of the political parties in Albania to continue to demand the full and rapid implementation of judicial reform.

Another question? Another follow-up?

Can I say something about where you started, about young people and what they are thinking in Albania. I am not a young person so I cannot speak for young people but I can speak for myself in that if you’d ask me six months ago which direction this country was going, I’m not sure what my response would have been. Today, I feel very optimistic for the future of this country and for the future of young people like yourself. Judicial reform is irreversible. It will bring with it increased investment and trade in this country and jobs and opportunity for young people like yourselves. It will push you down the road toward accession into the European Union and you did really well in the European Football Cup. It is a great time to be an Albanian and I think you should all be very proud of how your country has done over the last several months.

Q: I am Inva. I am 20-years-old and I have graduated in Public Relations in the European University of Tirana.  The question is about education. How do you see the situation of education here in Albania based on what has happened with the students and their protest?

A: I have been in Albania for a little less than two years. A lot has happened in education during the time I have been in Albania. What I recall in the beginning of my time here is the closing of several private universities. What I know as an American is that good education is possible from private or public universities. But it is very important that we keep high standards for both and I think that in general it is a very positive thing that Albanian society is looking to maintain high standards in private and in public universities in Albania-one thing. The current controversy is about admissions to university. I come from a country where it is often very hard to get into university and if you make it into university it is very hard to pay for university. As a father of two children who are getting to be a little older, I worry every day about how I’m going to have enough money for them to go to university. In Albania, I think parents worry about the same thing: will my children get into university and will I have enough money to be able to support them, particularly if it’s a private university. So, I think it is important that there are standards, that there are standards for how you are admitted to public universities and private; that it is not through corruption, that it is not through manipulation, that it is not through who your father is or who your uncle is, but it is really through competitive examination that you are selected to attend a university. Now, is that the case today in Albania? I don’t know. I know that there is a lot of attention by good journalists like yourselves to this question, I think society is looking at this question, I think people in government are asking themselves that, people in private universities are trying to figure out whether they should try to uphold the same standards. I think it is a very healthy thing for society to be reflecting on it. I don’t have the answer to it. I am just trying to collect enough money to send my kids to university but I think the dialogue is healthy and  I applaud the opposition, and the government and particularly civil society in the search for good answers. The harder question is what you do with all of you who graduate from university, how we are going to create jobs for all of you. I think we in the Embassy and your foreign partners are very focused on that question because just as my colleague here said, we don’t want you to leave this country. You are the hope for Albania and there needs to be enough opportunity here in which people compete fairly for good jobs that will attract you to stay in this country.

Any follow-up questions? Thank you very much. Those were interesting and difficult questions.