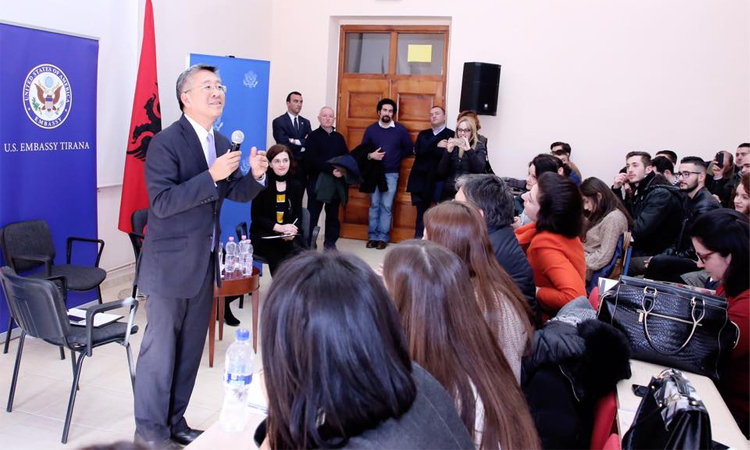 U.S. Ambassador Donald Lu was the first guest of the Humanities Forum talk series with students and lecturers at the Faculty of History and Philology today where he discussed the new U.S. Administration and its Foreign Policy. In his remarks, the Ambassador noted that “the White House has defined the President’s foreign policy goal as a stable, more peaceful world with less conflict and more common ground.” Ambassador Lu delivered remarks and responded to a wide variety of questions from the audience about new President Donald Trump and how some of his expressed policy platforms may affect the relations between the United States and Albania as well as other countries and regions in the world. The Ambassador also responded to questions related to NATO, noting that the U.S. would encourage more contributions from all alliance members. The Ambassador also emphasized that defeating ISIS has been defined as one of the highest foreign policy priorities, a goal shared with more than sixty countries in the anti-ISIS coalition, including Albania. Speaking about justice reform in Albania, Ambassador Lu noted that the Albanian people that demand and support it. The Ambassador stressed that the year ahead is “full of challenges when it comes to the implementation of judicial reform and the national elections.”