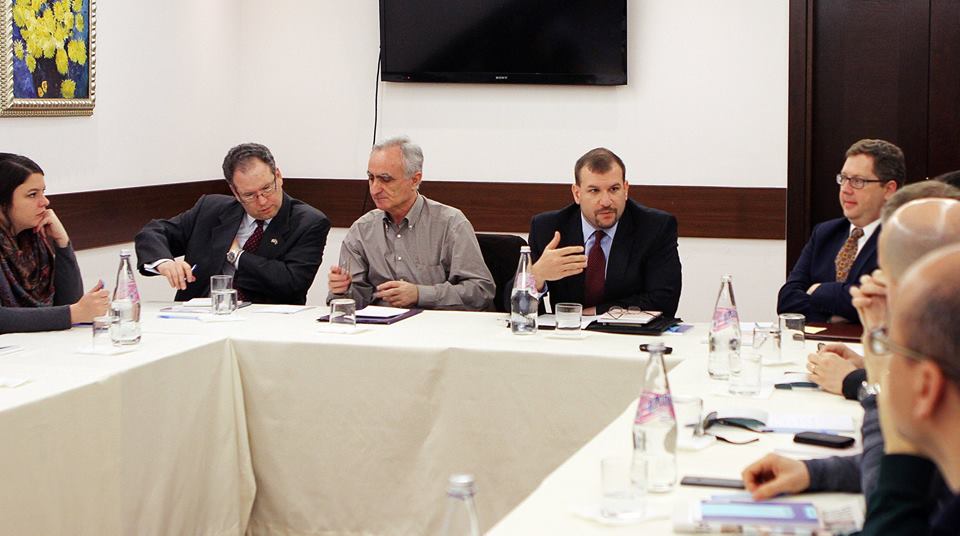 Deputy Chief of Mission David Muniz and Public Affairs Officer Ryan Roberts of the U.S. Embassy in Tirana attended a round table discussion that brought together five Albanian journalists who traveled to Belgrade in January and five Serb journalists who visited Tirana this week in an exchange program seeking to help overcome stereotypes in both the Albanian and Serbian media. Organized by the Albanian Media Institute, the exchange is intended to expand contacts between media professionals and improve reporting on neighbors in the Balkan region. During their visits to the respective capitals, the groups of journalists met with civil society representatives, businesses, members of parliament, government representatives and others. Speaking to the group, DCM Muniz said the Serbia-Albania relationship is “one of the bright spots in the region in the last few years. I think there is potential there and I hope that the relationship will continue to improve and grow, including economically.” Muniz said he has served previously in U.S. Embassies Kosovo and in Montenegro and said he had seen the poor and the better examples of media in perpetuating or overcoming stereotypes, “I have seen some of the poor reporting and stereotypes that both sides have of each other and the harm that can come from that. I encourage you to continue your interactions with each other, continue to open up your minds and perspectives, learn a bit more; if you’re a Serb, learn as much as you can about Albania; vice versa if you are Albanian. The more interaction we see, the more we’ll be breaking down the stereotypes and building a stronger region.”