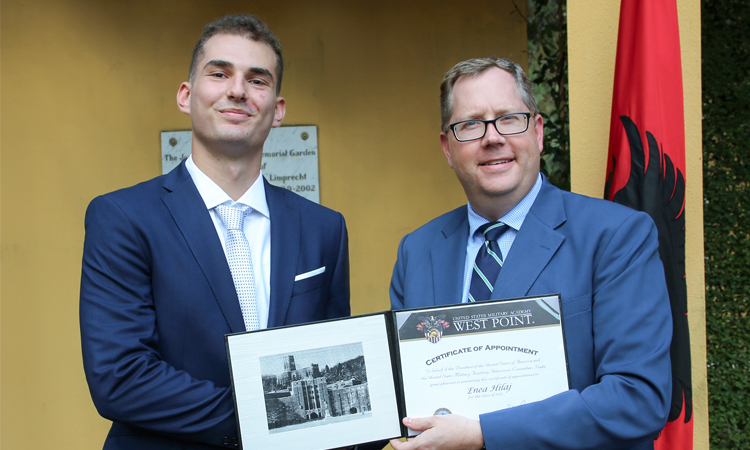 In a ceremony held on June 21 at the U.S. Embassy, U.S. Charge D’Affaires Ryan Roberts and U.S. Defense Attaché James Hilton presented the U.S. Military Academy (USMA) Acceptance Certificate to Albanian Cadet Enea Hilaj who was accompanied by his family.

Mr. Hilaj is the fourth Albanian Cadet to attend the Academy but the first one in over seven years.  Albania was selected as a recipient nation authorized for a very limited number of international candidate slots at the Academy this year.  Mr. Hilaj received the appointment through a fair and open competition coordinated by the Albanian Recruiting Center.  Mr. Hilaj is scheduled to graduate from West Point in 2022, at which time he will return to Albania to serve his contractual commitment in the Albanian Armed Forces as a Second Lieutenant.

Appointments to USMA are open to all civilian and military members ages 17 to 22.  Selections are made on an annual basis, are based on academic performance, physical fitness, and demonstrated leadership ability. More Albanian applicants are expected to compete for this scholarship in the years ahead. The U.S. Embassy’s Public Affairs Office will soon have information available to potential applicants who are interested in studying at the United States Military Academy in the coming years.

More information may be found at the following address.

The acceptance of this Cadet to West Point is the most recent example, in a long list of examples, of the outstanding relationship enjoyed between Albania and the United States of America.